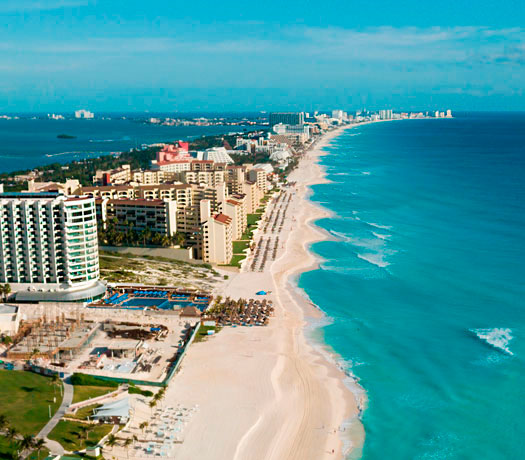 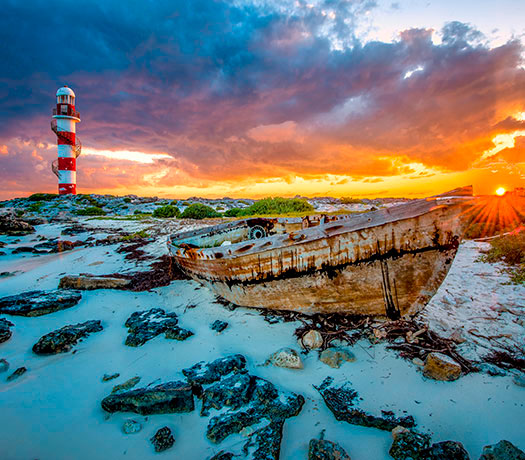 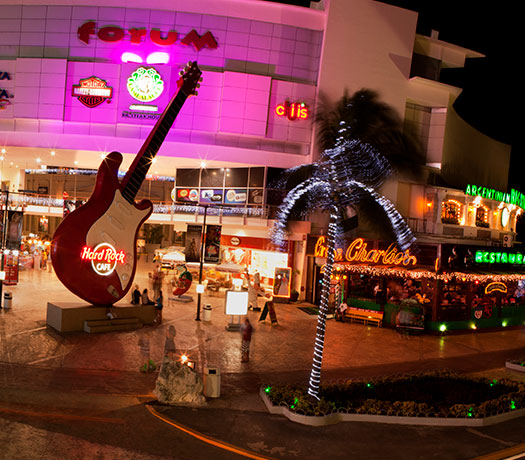 Cancun is one of the top tourist destinations in the world, and the most popular in Mexico. Featuring first-class hotel and business infrastructure, the destination offers excellent resorts with luxurious, state-of-the-art facilities, making it an ideal spot for meetings, incentive trips, or conventions. Whether you’re looking for a small meet-up or a large scale exhibition, there’s somewhere perfect for you in Cancun.

With an enviable location in the north of Quintana Roo state on Mexico’s Caribbean coast, Cancun is considered to be the gateway to the Mayan World. Its stunning natural attractions bring millions of tourists and businesspeople from across the country and the world looking for adventure, romance, or just a private place to get away for a while.

Most of the city’s hotels and resorts can be found on a long strip of land known as the Hotel Zone, on either side of the main avenue Kukulcan Boulevard. On the west side of the thoroughfare you’ll find Nichupte Lagoon, with its marinas, waterfront restaurants, shopping malls, and golf courses, and incredible sunsets for you to enjoy during your Cancun vacation. Known for its vibrant atmosphere and energy, Cancun’s hotel zone is also home to world-class nightclubs and bars, which you’ll find in its beating heart, the Party Zone.

Located close to the Party Zone, Cancun Convention Center boasts cutting edge facilities, state-of-the art technology, and more than 213,000 square meters of meeting space. Other large projects are well on the way in the Playa Mujeres area, which is just 20 minutes from the Hotel Zone and 50 from Cancun International Airport.

Why choose Cancun for your work meetings, incentive trips, conventions and events?

Cancun is a role model of tourism in Mexico; there are very few places in the world that can match the range of facilities, services, tours and activities on offer here, something that has made it the most famous tourist destination in Mexico.

Caressed warmly by the crystalline turquoise waters of the Caribbean Sea, Cancun’s white sandy beaches are the places to be. Perfect for water sports, relaxing in the sun, and tying the knot in an unbelievably romantic setting, the beaches here number among the most beautiful in the world, and have to be seen, to be felt, to be savored during your time here.

Cancun is known around the globe for its nightclubs. They say that Cancun has something for everyone, and this is especially true once the sun goes down. While there are a number of popular clubs that dominate the scene, most resorts will also offer live music in the lobby as well. Cancun nightlife is synonymous with fun and entertainment; complete with nightclubs, bars, parties, festivals, and shows, as well as live bands, top DJs and fabulous live shows. The Hotel Zone is where you’ll find Cancun’s best nightclubs, namely Coco Bongo and The City, which wow visitors with special effects, laser and light shows, and non-stop music. Most of them have an all-you-can-drink cover charge.  Read more

Cancun is one of the world’s main gateways, receiving millions of international travelers every single year. It is home to the second largest airport in Mexico, and is well-located within 15 minutes of the Cancun Hotel Zone and just an hour from Playa del Carmen. It offers direct flights to and from major cities in the United States and across the world, as well as excellent connectivity to the globe’s top airport hubs.  Read more

A Variety of Fun Activities

With a wealth of natural attractions, traditions, and culture, Cancun has so much to do that it’s hard to decide what to do first. Here you’ll find everything from exciting water sports and glamorous shopping to fabulous tours that take you diving, fishing, to theme parks, archaeological sites, and golf courses, or to beautiful islands nearby.

When combined with its cultural offering, specialized tourism infrastructure, and top of the range entertainment, the impressive array of attractions in Cancun has facilitated the rapid growth in its groups, incentive trip, and conventions industry.

Cancun has a well-developed hotel and commercial infrastructure, offering something for all budgets. Together with the neighboring Riviera Maya region, it is the standard-bearer for event organization in Mexico, offering the largest amount of rooms (many of them “All Inclusive”) and convention space in Mexico. The area has all you need for a successful event.

Cancun is recognized as a top-level tourist destination because of the excellent lodging options and services it provides, but it also has a rich and varied culinary offering. Thanks to a blend of different cultures, with local Yucatecan complementing dishes from other nations, Cancun has earned its star as a foodie’s paradise.

In keeping with its status as Mexico’s most popular tourist destination, Cancun has ultra-modern shopping malls offering global brand name boutique stores, as well as great duty free prices. Standout places to shop include Plaza Las Americas and Malecon Americas, which form the most popular shopping center in downtown Cancun; along with La Isla Shopping Village and Plaza Kukulcan in the Hotel Zone.

One of the main reasons to choose Cancun to hold your next business meeting, incentive trip or event, is the famous Mexican hospitality and the warm service we provide. Thanks to this, we have managed to build a strong base of repeat visitors, who have gone home satisfied and eager to return to our destination, time after time 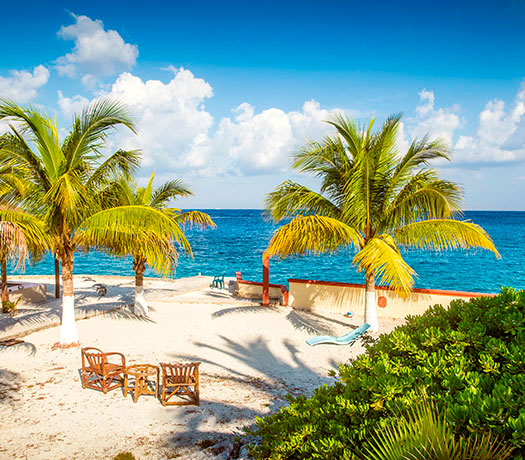 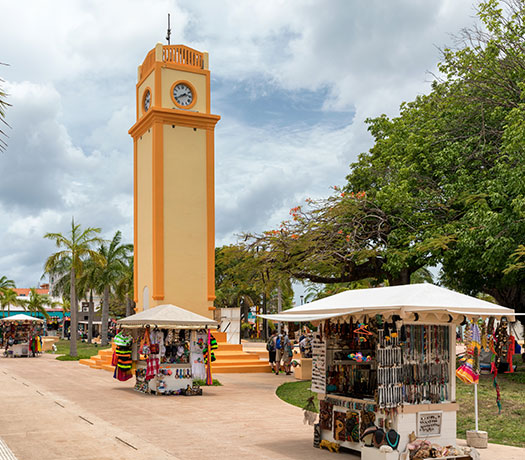 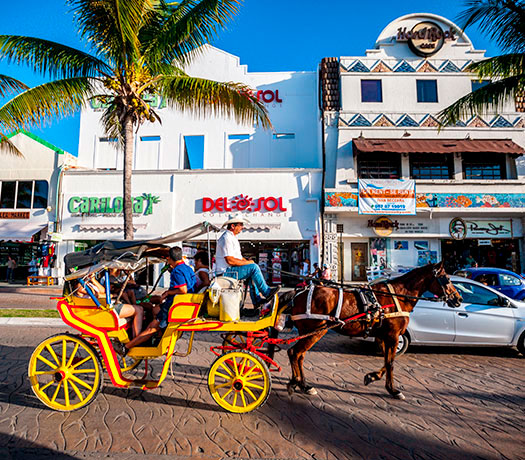 With beautiful beaches and stunning sunsets, Cozumel is the largest island in the Mexican Caribbean and receives a large influx of tourism daily thanks to its status as the most important cruise port in Mexico. Diving and snorkeling are just some of the many activities you can do on the island, where you'll find turquoise waters home to the second largest reef barrier in the world, full of tunnels and rare black coral. For those who prefer land-based activities, you'll find horse riding, tennis, golf and hiking available during your time on the island.

Cozumel's only town, San Miguel, is located on the western side of the island and is home to most of the hotels and resorts. Many of them are tourist complexes offering an all-inclusive plan. Cozumel seduces visitors by offering the best of Mexico: friendly people, fantastic restaurants, prestigious jewelers and fine perfumes in the "Duty Free" area, as well as cultural activities and fascinating places like San Gervasio, which was one of the main sacred sites of the Mayan civilization. 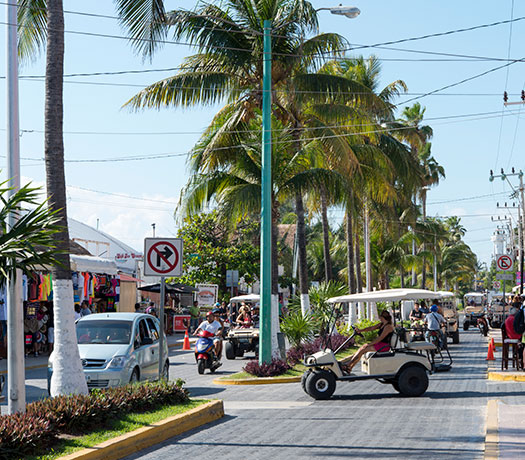 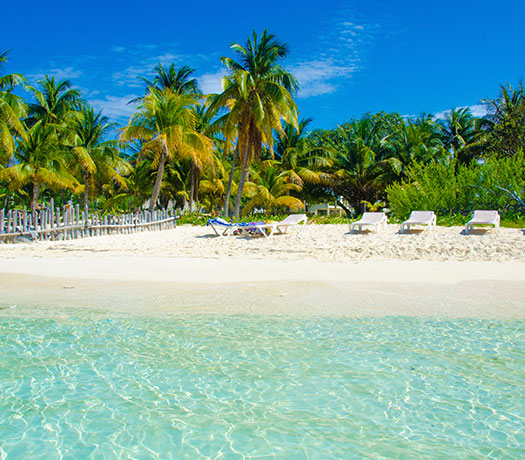 Isla Mujeres is a small, peaceful island located just 7 miles (a 20-minute boat journey) north of the Cancun coast. Less than a mile wide and only 5 miles long, it’s the perfect tropical retreat, filled with beautiful palm trees. Its harbor is dotted with colorful fishing boats and its sandy streets are lined with a chaotic blend of shops, outdoor cafes and restaurants. Golf carts, motorcycles or bicycles are the common mode of transport for residents and visitors alike.

Isla Mujeres offers visitors a chance to experience both “rustic island life” and a more upscale experience; facilities here have been designed for tourists, however, the island still manages to keep its simplicity and charm. The attractions on Isla Mujeres are numerous and varied, ranging from Garrafon National Park to the Mayan temple. It is a paradise-like place for scuba diving enthusiasts, who will be able to enjoy exploring the offshore reefs of El Farito, Punta Norte and stunning Manchones, as well as the Cave of the Sleeping Sharks and the Underwater Museum of Art. 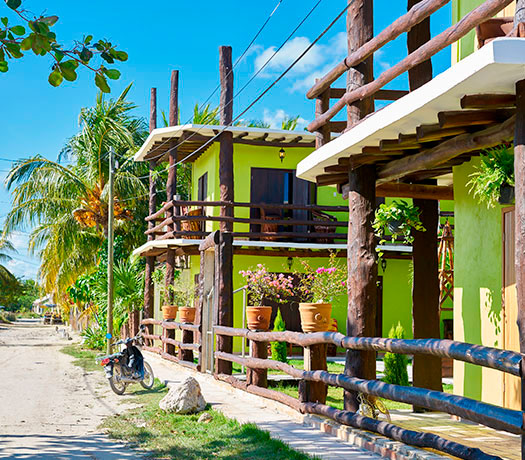 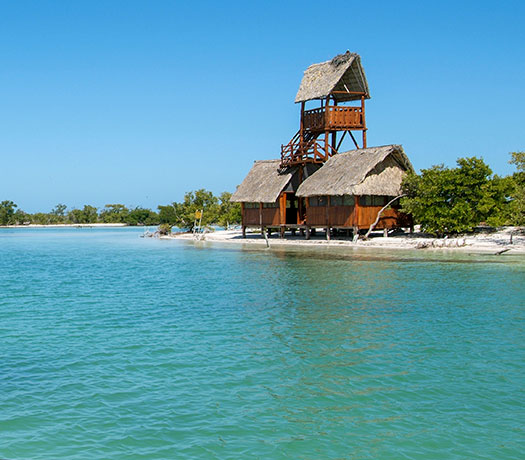 Holbox Island has an excellent location, right where beautiful turquoise colors of the Caribbean Sea merge with the emerald green waters of the Gulf of Mexico, providing an unparalleled beauty to its virgin white coralline beaches. The main draws here include a laid-back, relaxing setting complemented by stunning local flora and fauna. Holbox has been declared a protected area by the Mexican government and is inhabited by friendly people who move around the island using bikes, motorcycles and golf carts.

Admire thatched wooden huts as you walk through its unpaved streets, and enjoy delicious local cuisine based on exquisite fresh fish and seafood, with standout dishes including the best lobster you'll ever taste. Holbox is also one of the stops on the migratory route of the whale shark, the largest fish in the world, offering you the chance to swim alongside it between the months of May and September. You can also visit Isla Pasion (Passion Island) and Isla Pajaros (Bird Island), the latter inhabited by more than 100 species of exotic birds that include hundreds of flamingos. Another top attraction on the island is the Yalahau cenote, which forms part of the lagoon of the same name, featuring water so dark that it creates the illusion of a black hole, which is where the island gets its name (Holbox means black hole in Maya).

Thank you for sending us your request.

You will recieve a response from us shortly.

For more information about us and

Receive in your email exclusive information

THANK YOU FOR SUBSCRIBING