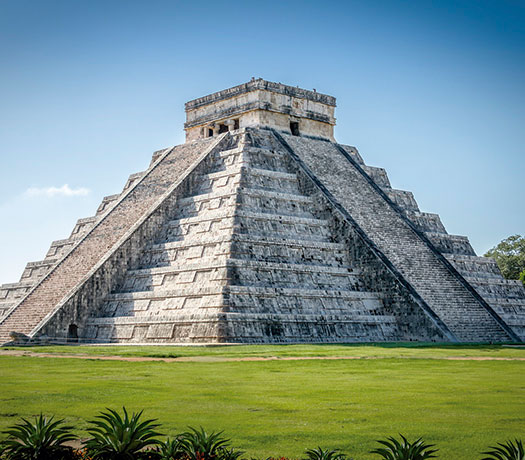 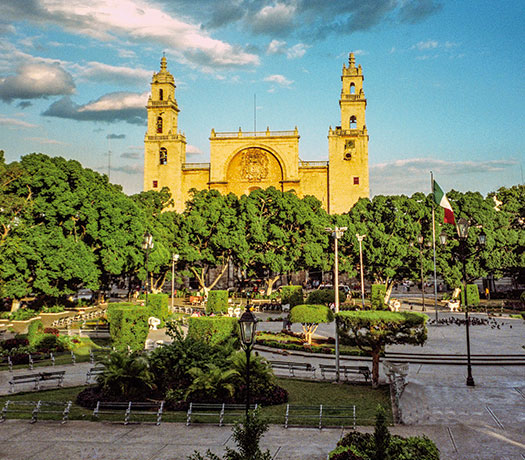 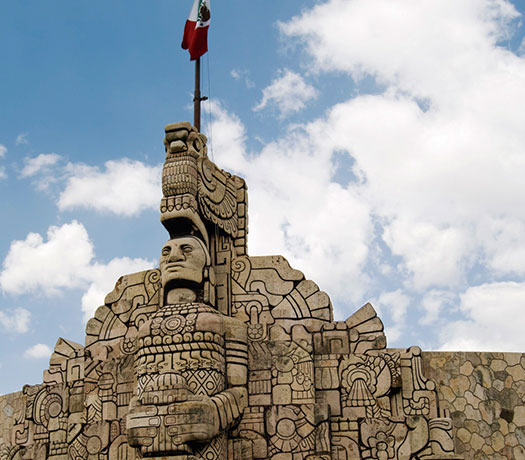 Known locally as "The White City", the majestic city of Merida is the capital of the state of Yucatan, and an exciting and fascinating tourist destination for all kinds of travelers. This traditional colonial city offers a delightful experience full of colors, aromas and the tastes of ancient Mexico, spiced up with a touch of modernity and a pinch of European sensibility.

Merida is a gateway to the Mayan culture and an excellent starting point for people looking to visit important archaeological sites such as Chichen Itza, which is the largest in the area and was founded between 750 and 1200 AD; Uxmal, and Dzibilchaltun. Other fascinating attractions in the region include the caves of Lol-Tun and Balankanche, along with the charming towns of Izamal and Valladolid. At the caves and the larger archaeological sites like Chichen Itza and Uxmal, you can marvel at impressive Light and Sound shows that complement the beauty of these architectural marvels.

Not everything in Merida is based around archeology and history; you can also appreciate music and folk dancing performances in local restaurants, theaters, parks and public courtyards, exceptional traditional dishes in the city's wide variety of eateries, and a walk along famous Paseo de Montejo, an enchanting avenue that resembles the Champs Elysees in Paris.

Few places in the world can offer Merida's combination of rich history, natural beauty, exotic cuisine, and welcoming people. This is why Merida was declared World Heritage by UNESCO in 2000, the same year when the OAS (Organization of American States) granted it the title of American Capital of Culture.

Why choose Merida for your work meetings, incentive trips, conventions and events?

There are countless reasons to visit Merida, but the main ones are sampling delicious Yucatecan dishes, using it as a base to visit Uxmal, Chichen Itza and other Mayan archaeological sites, and to find out more about this fascinating culture.

Merida is an excellent base to use for people looking to visit the region's impressive archaeological sites, the standout of which is Chichen Itza, where you can see the awe-inspiring Kukulcan pyramid, also known as El Castillo, the site's most famous building. In 2007, thanks to its majestic design and the astronomical precision of its construction, it was named as one of the 7 Wonders of the Modern World. Another site well-worth a mention is imposing Uxmal, which features incredible architecture noted for its beautiful frets, friezes and arches.  Read more

Built and named after the founder of Merida, Francisco de Montejo, this beautiful avenue is home to elegant neoclassical mansions. These well-preserved, luxurious buildings along Paseo de Montejo used to be large manors and have since been converted into government or private offices, museums, sophisticated dance clubs, bars and restaurants. This enchanting avenue is the Mexican version of Paris' Champs-Elysees in the Yucatan Peninsula.  Read more

Merida has an international airport that connects to 8 domestic destinations, as well as the cities of Houston, Dallas, Miami, Havana, Toronto, Belize and Milan. As for ground transportation, several roads converge in the city of Merida, notable among which is the 180 federal highway, which starts in the city of Campeche, connects with Valladolid, and then finishes in famous Cancun, in the neighboring state of Quintana Roo.  Read more

During your time in the city you can treat yourself to delicious specialty dishes that have earned Yucatan’s cuisine its position as one of the very best in the country. Merida’s cuisine blends traditional Mayan cooking with European influences, creating sumptuous dishes like cochinita pibil, relleno negro, panuchos and lime soup. Due to its richness and variety, Yucatecan cuisine has been recognized as Cultural Heritage of the State of Yucatan.  Read more

Merida appears in the ranking of the top 10 tourist destinations for meetings, congresses and conventions, not only for its attractions, but also for its very low crime rate. The city has a Convention Center with a main hall capable of holding up to 6,000 people complemented by over 65,000 square feet of outdoor event space. When you organize an event, incentive trip or convention meeting in Merida you allow your guests or participants the chance to attend fantastic cultural activities and enjoy mouthwatering Yucatecan cuisine, ensuring an unforgettable experience.  Read more

In Merida and Yucatan in general, shopping is a well-established tradition. Clothes made from 100% natural cotton are part of the cultural heritage. Women still proudly wear "huipiles", a dress used for everyday wear, as well as for parties and special events, when they are covered with spectacular jewels. Don't miss the opportunity to buy one for yourself or a relative as a souvenir while on your trip to Merida. Traditional menswear garments include guayaberas, which are light shirts with discreet designs that gentlemen wear for special events. Other typical souvenirs are hammocks, which form part of the way of life in the Yucatan Peninsula.  Read more

One of the main reasons to choose Merida to carry out your next work meeting, incentive trip or event, is the famous Mexican hospitality and the warm service we provide. Thanks to this, we have been able to consolidate a strong base of repeat visitors, who leave satisfied and eager to return to our destination again and again.

Thank you for sending us your request.

You will recieve a response from us shortly.

For more information about us and

Receive in your email exclusive information

THANK YOU FOR SUBSCRIBING